How to Be a Supervillain: Born to Be Good (Hardcover) 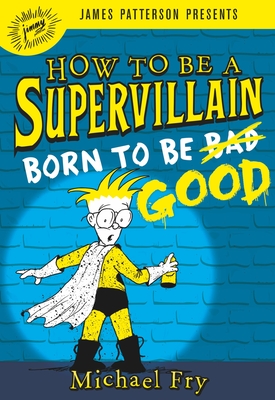 A sequel has never been this good...at being bad! In this highly anticipated follow-up to the bestselling How to Be a Supervillain, Victor Spoil must save the world from an evil scheme to enslave the superheroes and villains--to his parents' utter disappointment.
Victor Spoil hates the Junior Super Academy. It makes him cranky--and his parents couldn't be prouder, because supervillains aren't meant to be nice. Until Victor confesses he wants to leave and become a librarian. The horror!
But when superheroes and villains--including his parents--start disappearing, only a dedicated do-gooder like Victor can track them down. He discovers that the supers are being captured to square off against aliens in gladiator-like shows. And unlike the scripted fights that the supers usually sign up for, these battles are to the death!
Victor and his fellow super students must join together and harness their super powers to battle this dastardly mega-villain. But to be a hero, Victor finally has to embrace his inner villain. Will he be able to stoop that low?

Michael Fry has been a cartoonist for over 30 years, and is the co-creator and writer of the Over the Hedge comic strip which was turned into a Dreamworks film starring Bruce Willis and William Shatner. He lives near Austin, TX.

Praise for How to Be a Supervillain: Born to Be Good:
A Parents' Choice Awards (R) winner!

"With fun comic panel illustrations throughout, this sequel is sure to be a hit with fans of humorous illustrated novels."—Booklist

Praise for How to Be a Supervillain:
An IndieBound National Bestseller!

"The irreverent humor that middle graders relish will go a long way to capturing their interest. Superhero fans will enjoy this tongue-in-cheek take on the genre."—School Library Journal

"In this clever world, Over the Hedge comic-strip author Fry achieves an ideal balance of humor, poignancy, and zippy superhero/bad guy action, punctuated with frequent amusing black and white illustrations."—Bulletin of the Center for Children's Books

"Fry has written a hilarious story about an unlikely hero and masterfully incorporates the illustrations into the narrative. Victor's story is sure to be a hit among reluctant readers and fans of illustrated novels."
—Booklist

"Being bad at being bad has never been such good fun!"—Chris Grabenstein, NYT Bestselling author of Escape from Mr. Lemoncello's Library