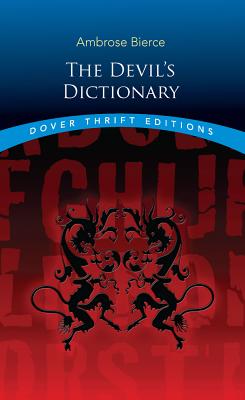 Born in Ohio in 1842, journalist, short-story writer and critic Ambrose Bierce developed into one of this country's most celebrated and cynical wits -- a merciless "American Swift" whose literary barbs were aimed at folly, self-delusion, politics, business, religion, literature and the arts. In this splendid "dictionary" of epigrams, essays, verses and vignettes, you'll find over 1,000 pointed definitions, e.g. Congratulation ("The civility of envy"), Coward ("One who in a perilous emergency thinks with his legs") and Historian ("A broad-gauge gossip"). Anyone who likes to laugh will love The Devil's Dictionary. Anyone looking for a bon mot to enliven their next speech, paper or conversation will have a field day thumbing through what H. L. Mencken called "some of the most gorgeous witticisms in the English language.

Journalist, short story writer, and satirist Ambrose Bierce (1842-1914) was equally adept in a variety of genres, from ghost stories to poetry to political commentary. Bierce's fiction is particularly distinguished by its realistic depictions of the author's Civil War experiences.