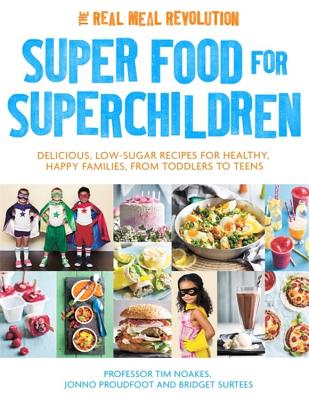 There is so much dietary advice out there, much of it conflicting, that it can be difficult for busy parents to make sense of it all. Medical doctor and sports scientist, Professor Tim Noakes, chef and long-distance swimmer, Jonno Proudfoot, and dietitian Bridget Surtees, a specialist in paediatric nutrition, cut through the clamour to provide clear, proven guidelines and simple, delicious recipes to feed your family well, inexpensively and without fuss.

Following their phenomenal, record-breaking success with The Real Meal Revolution, the Real Meal team set out to rethink the way we feed our children. The result, Superfood for Superchildren, challenges many ingrained dietary beliefs and advocates a real-food diet for children - from toddlers to teens - that is low in sugar and refined carbohydrates. Their advice is solidly underpinned by a critical, scientific interrogation of the the children's food industry.

By combining the latest peer-reviewed scientific evidence with straightforward, mouthwatering recipes, most of them for the whole family, Superfood for Superchildren shows clearly how to provide your children with the best possible nutrition to help them to grow up healthy and happy.

Tim Noakes (Author)
PROFESSOR TIM NOAKES (the Scientist) is a widely respected Professor of Exercise and Sports Science at the University of Cape Town. He has run more than 70 marathons and ultra-marathons and is the author of the books The Lore of Running, Challenging Beliefs and Waterlogged. After publishing his latest book, Tim entered the dietary sphere, challenging the science behind obesity, coronary heart disease and heart attacks. Subsequently he has dedicated his life to opening people's eyes to the myth of low-fat eating and the nutritional and environmental crisis it has led us to. In this book, Tim unleashes the science behind the research and studies he has been conducting since the inception of this 'bee in his bonnet'.

Jonno Proudfoot (Author)
JONNO PROUDFOOT (the Chef) trained and worked in a five-times Top Ten-rated restaurant early in his career, later moving through a variety of food and wine establishments before finding his passion in Paleo and LCHF cookery. Since the birth of his interest in performance food and nutrition he has co-hosted 52 episodes of award-winning children's cooking show, What's Your Flava. He also starred in the TV reality cooking series Ultimate Braai [Barbecue] Master in 2013. On 23 March 2014, Jonno and his friend Thane Williams became the first people to swim from Mozambique to Madagascar, taking 24 days to cover an incredible 460km, thereby setting a world record for the longest open-ocean unassisted stage-swim of all time.

Bridget Surtees (Author)
Bridget Surtees is a registered dietitian specialising in paediatric nutrition, eating disorders and nutritional therapy for metabolic syndrome sufferers. Having spent extended spells working at University College Hospital in London and Sydney Children's Hospital in Australia, Bridget has relocated back to Cape Town, where she runs a private dietetics practice, Nutrition4Kids, and works at any addiction clinic for those with eating disorders and sugar addiction. She is married with two children.

My favourite part about the whole book is how normal the recipes are—Terri, Le Book Chronicles

This is a must for anyone interested in nutrition . . . most of the recipes are easy enough for children to get involved with too—Independent