The Chinese Cornerstone of Modern Banking: The Canton Guaranty System and the Origins of Bank Deposit Insurance 1780-1933 (Legal History Library / Studies in the History of Private La #14) (Hardcover) 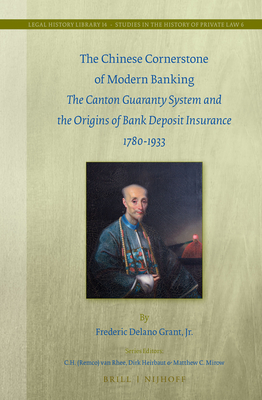 Modern bank insurance is traced to its roots in The Chinese Cornerstone of Modern Banking: The Canton Guaranty System and the Origins of Bank Deposit Insurance 1780-1933. Frederic Delano Grant, Jr. provides new understandings of the Canton System, collective responsibility for debt at Canton, and the history of deposit insurance.

The Canton Guaranty System inspired radical reform in New York in 1829 - the ancestor of all modern deposit insurance. Yet it was never the success imagined, and soon failed. In the Opium War, the Chinese government as implicit guarantor was forced to pay its debts in full on 23 July 1843. The afflictions of the Chinese system, including moral hazard, too big to fail, and unenforced laws, remain familiar today.